It was on this day, the 31st of October, exactly three hundred years ago, that a wealthy merchant by the name of Sir Thomas Crewell decided to host a party at his home, Bromefield House, the ruins of which remain standing to this day here in Broomfield Park. Entertainment for the party was to be provided by a fine fiddler by the name of Bob. Bob was a wandering musician and a good friend of Sir Thomas's gardener.

It was a splendid party and Sir Thomas and his friends had a wonderful time. Though it was freezing outside, their spirits were warmed by the wine and good company and some even took to dancing to Bob's merry tunes.

At some point during the evening, the violinist took a break and disappeared from view. Later there was an outcry when it was discovered that Bob had pocketed money and jewels that had been left unattended, unaware that he was seen by a servant waiting in the shadows.

Sir Thomas was furious at being embarrassed in front of his guests, and he had both the musician and the gardener who recommended him immediately thrown out wearing nothing but the clothes they stood up in.

Now remember this was a freezing cold night. Inside, blazing fires and wild merry-making kept the merchant's guests warm, but outside ice covered the lake in front of the house, thick frost layered the trees and there was nowhere for the two men to seek shelter.

Their frozen bodies were discovered the next morning, huddled under a tree. The men were quickly buried in woodland on the other side of the lake, just where the bandstand is now, and the whole incident was hushed up, the party guests sworn to secrecy. 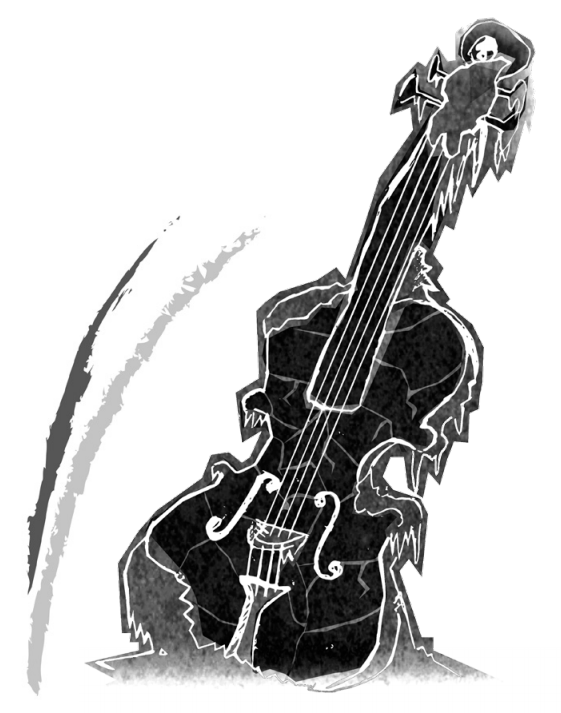 And now let us move forward in time to the present – to this very day in fact – and meet Dave, a local resident, and his young spaniel Charlie....

'Time for a walk,' Dave said to Charlie. 'I fancy a wander around Broomfield Park, what do you say to that?'

Charlie pulled excitedly on his lead as they went through the park gate. The sun was out and a breeze ruffled the air as they passed in front of the ruins of Broomfield House. But just as Dave was thinking how mild it was, the wind suddenly dropped and a chill began to descend. The temperature fell further and a thick mist rose from the lake. Dave wasn't dressed for this. He pulled his thin coat closer and lifted up the collar.

Oddly, the water birds that normally screeched, squabbled and splashed in such great numbers on the lake were nowhere to be seen. And where were the joggers, the walkers, the mothers wheeling buggies and their excitable children?

Dave felt quite alone, and as for Charlie... The dog was stock-still, the hairs on his back rising as he stared across to the bandstand on the other side of the lake.

Stranger still, Dave could hear music coming from the bandstand, a sad tune he didn't recognise, played on a violin.

What's going on, thought Dave as he set off around the lake to investigate, tugging Charlie on his lead – the spaniel clearly wanted to go in the opposite direction.

As they approached the bandstand the music stopped, and Dave could see no musician anywhere. What he did see was an old man raking leaves into big piles. Dave was relieved to find him there, but the man looked cold and wretched. He was very pale and peculiarly dressed in an old-fashioned smock and ragged trousers.

'Er, excuse me,' said Dave. 'I thought I heard music. Did you see anyone playing a violin?

The reply came in a low, slow growl. 'Yeah, that would be my mate, Bob. He's always on the fiddle.'

'But I can't see anybody,' said Dave.

'Well, that's cos you're not looking properly. Try again. You're gettin' there. You can see me can't you...'

Just then the music started up again, the tune now a fast, lively jig. Dave turned to the bandstand and this time, through the swirling mist, he could make out a figure playing the fiddle, tapping his foot to keep time. He too was oddly dressed, like a troubadour from centuries ago – a billowing shirt, knee breeches and a wide-brimmed floppy hat that put his face in shadow.

'Oh, I can see him now,' said Dave, spinning round to the old leaf-raker. But now he had disappeared, the piles of leaves the only sign that he had ever been there at all.

By now Dave was becoming alarmed. He tugged at his still petrified dog. 'Right, that's it, we're going.' As they drew away from the lake the music abruptly stopped, and when Dave turned once more to the bandstand, he saw that it was completely empty. As suddenly as it had fallen, the temperature rose and the mist lifted. Seagulls wheeled around the lake, children played, people were walking their dogs.

Did it really happen, or was it all a dream? Who can be sure? But next time you happen to wander down by the bandstand in Broomfield Park, listen closely. Is that sound you're hearing really just the wind in the trees, or is it Bandstand Bob, the phantom fiddler, playing his frantic final jig?