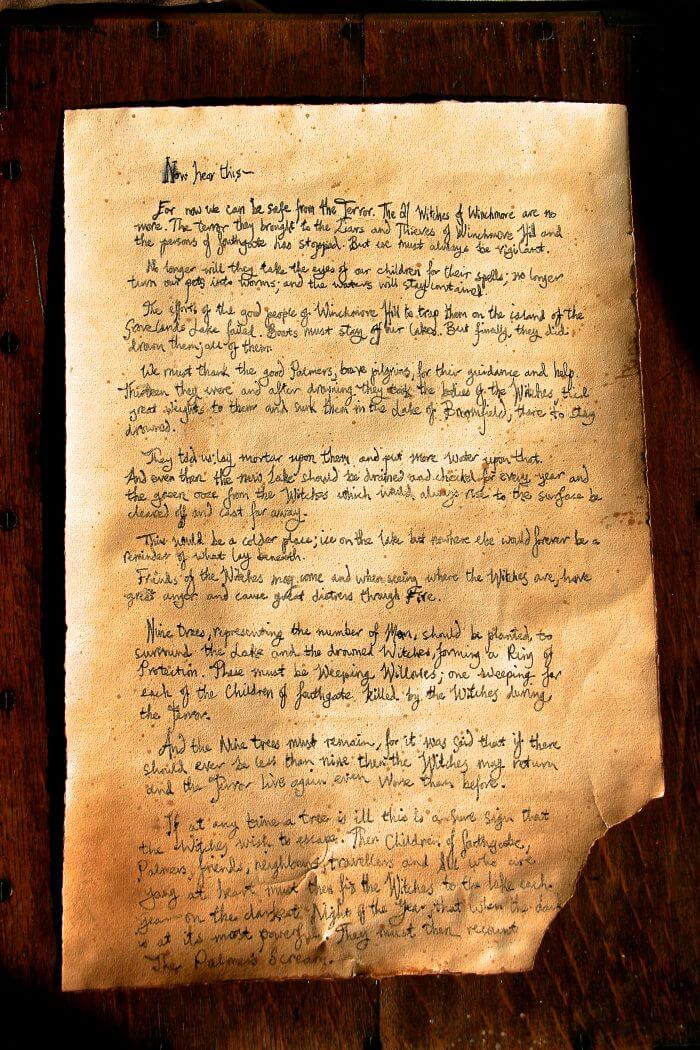 For now we can be safe from the Terror. The 21 witches of Winchmore are no more. The terror they brought to the liars and thieves of Winchmore Hill and the persons of Southgate has stopped. But we must be always vigilant.

No longer will they take the eyes of our children for their spells; no longer turn our pets into worms; and the waters will stay contained.

The efforts of the good people of Winchmore Hill to trap them on the island of the Grovelands Lake failed. Boats must stay off our lakes. But finally they did drown them; all of them.

We must thank the good Palmers (pilgrims) for their guidance and help. Thirteen they were and after drowning they took the bodies of the witches, tied great weights to them and sunk them in the lake of the Broomfield, there to stay drowned.

They told us to build mortar on top and then put more water on top of that. And even then the new lake should be drained and checked for every year and the green ooze from the witches which would always rise to the surface be cleared off and cast far away.

This would be a colder place; ice on the lake but nowhere else would forever be a reminder of what lay beneath.

Friends of the witches may come and when seeing where the witches are, have anger and cause great distress through fire.

Nine trees, representing the number of Man, should be planted to surround the lake and the drowned witches forming a ring of protection. These must be weeping willows, one weeping for each of the children of Southgate killed by the witches during the Terror.

And the nine trees must remain, for it was said that if there should ever be less than nine then the witches may return and the Terror live again even worse than before.

If at any time a tree is ill this is a sure sign that the witches wish to escape. Then children of Southgate, Palmers, friends, neighbours, travellers and all who are young at heart must then fix the witches to the lake each year on the darkest night of the year, that when the dark is at its most powerful. They must recount The Palmers Scream.