AT THE BOATING LAKE

It had been raining all day – his birthday, and a Sunday as well. But now as the October light started to dim, he realised the rain had finally stopped its tattoo against the window. He jumped off the sofa and went first to tell his mother it was time to go, and then to fetch the new remote-controlled speedboat she had bought him.

One road after another branched to the right off Fox Lane, each sloping down towards the park at a slightly different angle. He ran anxiously before her, trying to work out which route would get them there soonest. He decided to stay on the lane until they reached the second turning – yes, that would be best. But when he reached the first junction and turned to check the traffic, his mother gestured at him to pause until she could catch up. He frowned to himself. These were quiet suburban streets, and he was quite old enough to cross roads on his own.

Impatient, he gave up his plan and turned down the first side road. He picked up speed as the pavement fell away downhill, but then saw the park glowing green-dark ahead of him, and slowed up a little. An almost full moon hung high above the horizon, brightening as the daylight faded.

As he heard his mother drawing closer behind him, he glanced up at the houses to his right. As in all these streets, they were imposing brick mansions, surely quite old, with a strange variety of design and detailing. He particularly liked the white-painted wooden balconies which sagged cheerfully from some of the bigger houses, reminding him of seaside beach huts. He saw one of these now a few doors ahead, with a light in the window behind it.

As they came closer he saw in the window the head of a fair-haired child – a girl, he thought, though it was hard to see – and then the child's waving arm. He turned to his mother, who had nearly drawn level with him now. She seemed to know everyone in Palmers Green, even though the two of them had only lived here for a few months.

"Do you know who lives in that house, mum?"

"No darling, I hardly know anyone in this road. Is it someone you go to school with?"

His mother looked up at the window, and at that moment the light went out. He turned and hurried again down the pavement towards the main road. As they neared the bottom of the hill he crossed to the other pavement, gaining a few yards toward the park gates. His mother followed a little behind.

When he reached the far kerb he turned to wait, and in the living room of the house directly behind her, he saw - silhouetted this time against lamplight from the back of the room – what looked to him like the same child's head. Then curtains were drawn suddenly across the window by an invisible hand. He took his mother's hand and urged her on towards their destination, noticing now how bright the headlights of the cars on the main road had become as the dusk thickened.

Just after they passed through the park's angular iron gates she paused to check the closing time scrawled on a notice-board. "You've got about fifteen minutes until they start locking up", she called after him. "Stick to the side by the road, darling, where I can see you. That way they won't lock you in!"

Before they had set out he had packed his new boat carefully back into its box. Now he started to fumble the box free of its carrier bag as he ran the last few yards down the path to the boating lake. He saw an empty bench only a little way past the point where the lake's shallow concrete bank came nearest to the road, and hurried on to claim it as his base of operations.

The boat was soon ready to go, its orange hull still soap-smeared from a cramped trial run in the bath that morning. He wrapped the empty box carefully back into the carrier to protect it from the damp wood of the bench.

Apart from a couple of huddled strollers returning from the fishponds below the lake, he had the scene to himself. His mother had stopped back near the gates to talk to someone. He carefully placed the craft into the water, parallel to the bank, bracing his legs carefully so he ran no risk of following it. Then he picked up the control box, switched the boat into life - feeling the satisfying resistance of the controls to his nervous fingers - and watched with delight as it curved a path away to the other side of the lake.

He manoeuvred the speedboat on three or four circuits of the giant oval – first one way and then the other with occasional veering turns in toward the middle of the expanse of shallow water. Wavelets of wash rippled in all directions. As he sent the boat on what he told himself would be its last-but-one lap, he saw the fair-haired child on the other side of the lake, head shining against the dark trees behind, apparently watching him.

He waved, and saw the child slowly raise its arm to wave back, then point up at the sky behind him. He turned, twisting his neck, and saw that the moon was now the thinnest of crescents, shining chilly and brighter than ever against the deepening dark.

He looked back, puzzled, across the boating lake. He could no longer see the small figure – and now suddenly realised that he couldn't see his new boat either. He scanned the great oval space again and again – nothing, except a slender shadow out in the middle of the water. He plucked at the control box, but its switches clacked from side to side without result.

And then he saw the shadow start to resolve into something more – a small toy sailing boat, of an old-fashioned type. He realised it was zigzagging fast towards him, its moonlight-silver sail swinging with sudden violence from one side to the other each time it changed direction. But as it came closer to his place on the bank, it started to shimmer back into shadow.

With a strange feeling – a mix of excitement and fear – he leaned towards it to get a better view. He thought he heard a muffled giggle close behind him, and then felt his foot give way. He slipped forward into the dark water as his mother came running with a sudden shout. 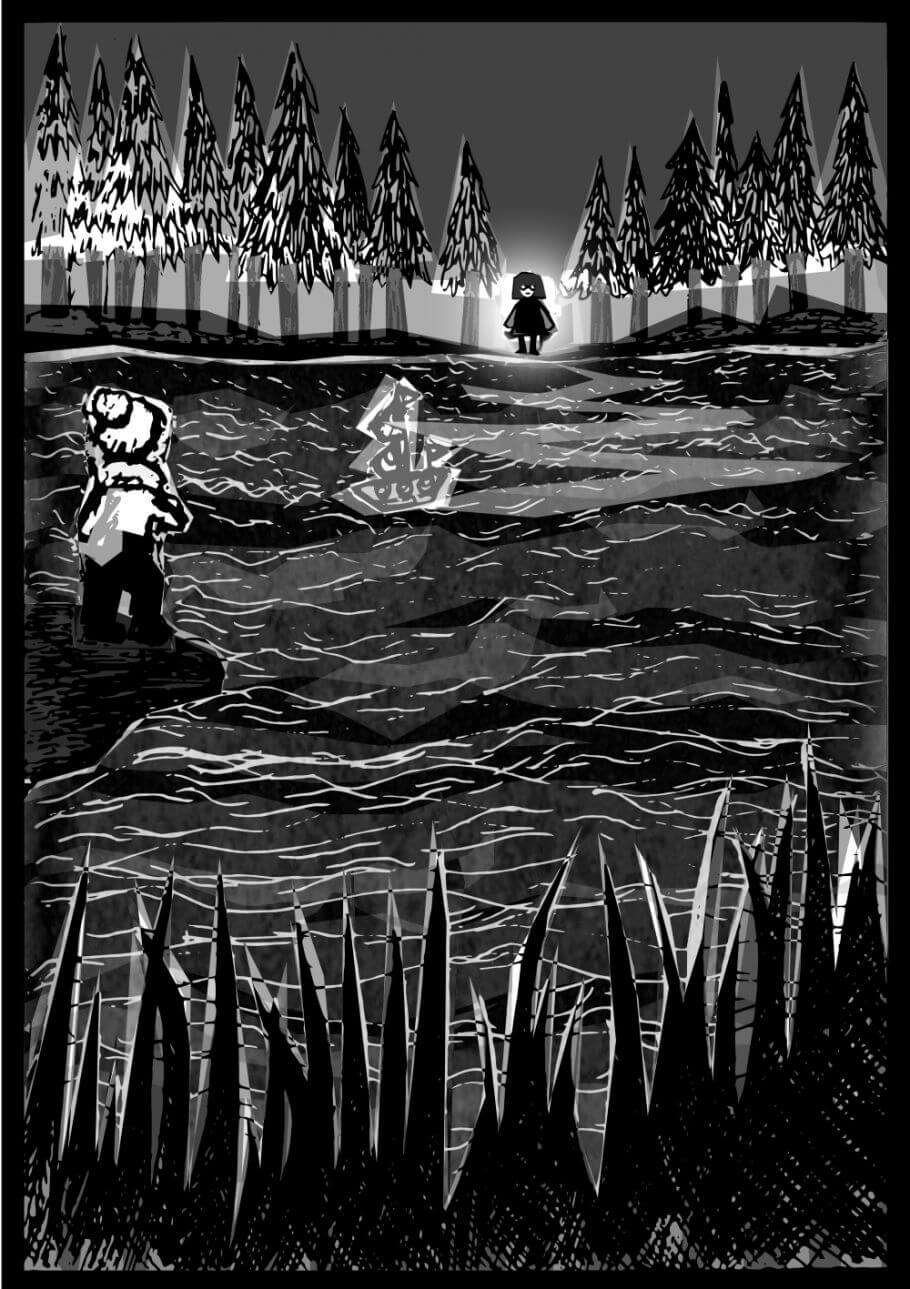