In the distance of Broomfield Park, Connor could see a shattered roof. Slates fell like dominoes. As he walked closer, he can see the windows : shattered, dark, like blind eyes. Behind him the wind groaned through the falling branches of the copse.

A pernicious feeling crept up Connors spine. He could hear a melancholy cry, which made in tremble. The speck of light glowed in the shadows but was suddenly extinguished.

Connor shivered as he peered closer to the window; was it a person? Or just part of the bedraggled curtains? He wasn't going to wait to find out. Why on earth has he left his friends and warmth of the camp fire?

By now Connor was out of breath, scared and worried. He had only been running for 10 minutes and already it felt more alone. Connor slowed his pace down, enough to catch sight of the blue of his tent and smell the burning of the fire. " Ben, Jake, Tom," he panted, ready to tell them about the adventures he had had. "You will never believe the time I've had, so basi....". Then Connor stopped. The park was empty! What was going on? Was this just some sick game; or real? Gradually Connor squatted down. As Connor glanced up, there was a hand creeping round a bush, it's mouldy nails and dirty fingers were starting to scare Connor. He remembered why - it wasn't a person or some curtains at that window; it was a hand! Connor didn't know what to think apart from run...

To Connor, all the branches and trees seemed to be hands; out to get him. Every time one scraped his face your touched his hair he took a silent gasp, until at last he got to a road! It was like heaven to him, now he just had to find a way home.

Flustered, he looked around the street in a hurry and stuck out his hand, hoping for a lift home. A seemingly kind figure pulled over for him. As he got in he wondered what he was going to tell everyone at home! " Oh thank you so much for driving me, I'd like to go to 98 Southgate Road please. It should be just around the corner." Connor waited for a reply. Then figure turned around and the first thing Connor saw were mouldy nails and dirty fingers... 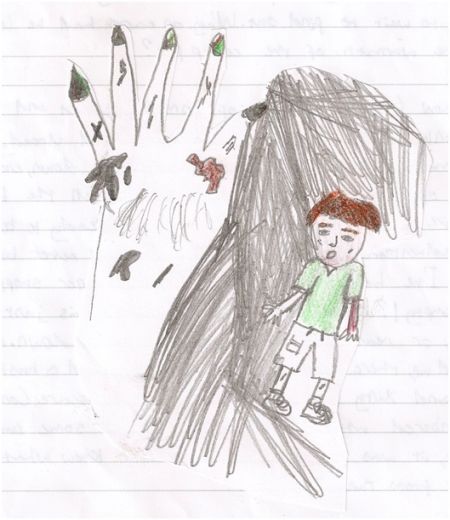