On the twenty first of May seventeen ninety one, Sam stump strolled through the overgrown forest of Grovelands Park as he walked back from the fair. He was pleased with himself because he had just bought himself a new penknife from a mysterious man at the fair. It was meant to be five guineas but he didn't have that on him, so he gave the man a dead cat that he'd found on the way there. He particularly liked the pointed hat carved into the handle of the knife.

As Sam walked through the forest he could hear peculiar noises - and someone eerily calling his name, 'Sam, SAM, SAM, SAM'. Several questions came to his mind, 'who was calling him?' and 'what do they want?'. He decided to run until he came to a leafy bush, where he hid. He poked his head out of his hiding place and saw a tall woman with a pale face and eyes like slits. She hissed 'you know I can see you little boy, either come out of your hiding place or I get you out!', 'I'm nnnot aa bbaby, I thinnk I can do it bby myssself', replied Sam. 'Good! Now let me kidnap you.' 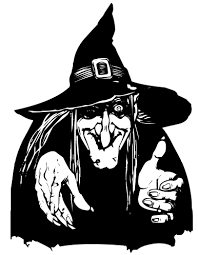 The witch took Sam to her lair. It was covered in thorns and was not very inviting. As he stepped forward, fear crept down Sam's back. Her long, curved, brown nails dug into his flesh as she held his arms tightly and he could feel blood dripping down his wrist. In the lair, Sam could smell the decaying soil and leaves, and the corpses of the dead children kidnaped years before him.

He saw a group witches sitting around a cauldron, there were bats swirling and that awful smell. 'Ooo goody, you have super' said one witch, 'yes it's a nice juicy one as well' answered his kidnapper. 'LEAVE ME ALONE, I'M ONLY NINE' yelled Sam. 'Shut it will you' screeched the ugliest of the witches, as she shoved him in the piping hot cauldron. The smell was horrible as Sam fell into the purple mixture.

And that was the end of Sam stump or was it? For Sam had his penknife. Something must have been magic about that penknife! For Sam survived the terrible heat. Sam scrambled out of the cauldron as the witches stared in shock. This gave Sam the chance to kill the witches one by one with his penknife. (Dear reader, it's lucky that boys from the age of four and up always had a pen knife at hand, always handy to sharpen a quill.)

You may think the witches would be dead but no they survived!!!

The eldest of the witches screeched 'we are immortal for your information but we are scared of the knife of the wishing warlock'. Sam ran for his life. He stumbled over branches, swam across the lake and ran through the lanes until he came to his ramshackle old hut. He could never be so glad to be home. But he was scolded badly by his mother, until he explained what happened that night in the forest.

So, if you go for a walk in Grovelands Park, be aware of the three witches! By the way they only appear at dusk and dawn.